Scientists are careful people who do not make statements without knowing the facts. They try hard to get things right. So we think; hope.

But there is a very curious case where intelligent, knowledgeable scientists seem to get things wrong at an alarming frequency. It is quite interesting, because the misunderstanding isn't that hard to avoid. It is a mystery why scientists keep flunking it. In an added twist of diabolical irony, the very article published to explicitly demolish the misunderstanding is often cited in support of it!

I am thinking of the so-called Central Dogma of Molecular Biology, a statement about the information flow between DNA, RNA and protein. It was published in 1958 by Francis Crick, co-discoverer of the double-helical structure of DNA, Nobel Prize laureate 1962 and a true giant of 20th century science.

The misunderstanding of the Central Dogma can be stated in different ways. It is claimed that, e.g.:

All these statements are wrong. Not about the facts of the biological phenomena in themselves, but in the claim that they affect the Central Dogma.

It is important to note that as stated here, the Central Dogma is even today exactly correct! Nothing in this statement has been shown to be wrong.

Incidentally, the paper containing the first statement of the Central Dogma is a veritable fireworks of ideas, interpretations and hypotheses. It is a joy to read. It's a snapshot of a scientific field at a time of fascinating confusion and progress. To be sure, it does put forth a number of hypotheses which have turned out to be either flatly wrong or subtly mistaken. But the Central Dogma is not one of those.

In 1970, Crick published a paper (Nature 1970, vol 227, issue 5258, pp 561-563) to explicitly combat widespread misconceptions of the Central Dogma. It is this paper that is so often cited in support of those very same mistaken interpretations of the Central Dogma that Crick tried to eradicate. Rarely has a brilliant scientific paper failed so miserably! Referring to a paper containing the misunderstanding, he wrote:

And he illustrated the Central Dogma in the following way: 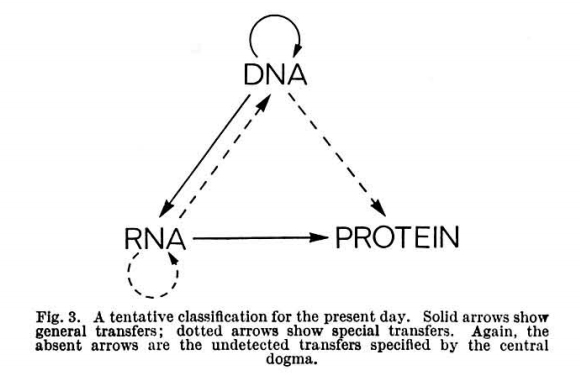 The essential message of this image is the absence of arrows from protein to either RNA, DNA or protein. Crick wrote:

Or, in other words, there is no enzyme that can be called a "protein-directed reverse translatase" or "reverse ribosome", nor is there any "protein-directed protein polymerase". This holds perfectly and exactly true to this day.

What is the basis of the misunderstanding? Why do so many believe that the Central Dogma has been superseded? Basically, it's a confusion of information flow in the cell with information flow from the sequences of DNA into RNA and protein.

As soon as it became reasonably clear which roles DNA and protein played, neither Crick nor really anyone else ever considered that the information flow in the cell did not involve proteins affecting DNA expression. In fact, the notion that any knowledgeable scientist, let alone Francis Crick, could have believed that DNA expression can occur without being regulated directly or indirectly by the environment is, frankly, ludicrous.

I have recently come across several cases of misunderstandings of the Central Dogma in Ph.D. theses. In Sweden, a Ph.D. thesis in the biomedical sciences most often consists of 3-5 regular scientific papers, either already published in scientific journals, or in manuscript form intended for publication. In addition, the thesis also contains an introduction which puts the results of the regular scientific papers in perspective. This introduction often contains a brief overview of the fundamental facts of molecular biology and biochemistry. Its function is in part to show that the student understands the field in general. It is here the misunderstanding usually rears its ugly head.

I will here quote from a recent Ph.D. thesis which clearly shows the misunderstanding. The name of the author is uninteresting, since I am concerned about the general phenomenon, not the individual scientist.

In this example, there is even an illustration showing "a more realistic representation" than the Central Dogma. Which is incorrect, because Crick's Central Dogma is still exactly right, and there is no need of a "more realistic representation". The basis of the misunderstanding is clearly present in the last sentence of the first paragraph, where it is claimed that "the central dogma postulates that the information flow in the cell...". This is wrong. The Central Dogma does no such thing.

So how serious is this problem? In a rather simplistic exercise, I gathered a bunch of Ph.D. theses from 2009 to 2015 that were lying around at my place of work, SciLifeLab. In 9 of them, there was no mention of the Central Dogma, mostly because they focused on technology rather than basic science. In the remaining 8 thesis, 4 mention the Central Dogma and describe it correctly. The final 4 either get it completely wrong, or make statements that show evidence of the misunderstanding. Out of 16 (or 8, depending on how one sees it), 4 fail. That is not a very good statistic.

It should be noted that a possible explanation - that there is something wrong with the education leading up to the Ph.D. theses - does not seem likely. The pattern is not very consistent, so it is more likely that the young scientists have formed these views on their own. It would be interesting to figure out what the root cause is, but I have no idea how to do that.

What is the moral of this? It can be condensed into two rules:

If you think morals is boring, then have a look at this wonderful film made in 1971 at Stanford, which illustrates how the ribosome acts to translate mRNA into protein, one of the transfers of sequence information allowed by the Central Dogma.

Addition: Casey Bergman (@caseybergman) made me aware of a blog post from 15 Jan 2007 by Laurence A. Moran which traces the origin of the misunderstanding all the way back to Jim Watson, of all people! He apparently messed up the vital distinction in the first edition of his textbook The Molecular Biology of the Gene (1965). And there are other textbooks that provide confusion on the subject as well. Sigh...

Correction: In the sentence "In fact, the notion that...", it now says "without" rather than "with"! Thanks James Gilbert for spotting!